Jensen, 69, recently retired as General Manager of Riverview Golf and Country Club, a position he held for eight years. Previously the Shasta High School and Shasta College graduate spent 37 years with Pepsi-Cola Bottling of Northern California, retiring in 2011 as the company’s General Manager.

Known informally as the Louie Foundation, the organization was established in 2011 as a way to honor Miramontes, a popular golf pro who died of cancer at age 41. To date the Louie Foundation has contributed more than $800,000 on projects aimed at improving cancer care in the north state.

Jensen said the foundation’s short-term goals include partnering with Mercy Medical Center on development of an oncology center at its’ proposed Wellness Campus in Redding and pursuing the foundation’s vision that top-quality cancer prevention, diagnostic and treatment services should be available to patients without the burden of having to travel to Sacramento, San Francisco or beyond.

To learn more about the Louie Foundation and its’ signature event, the Louie Shoot-out, visit www.louiefoundation.com.

The Promise of a New Year 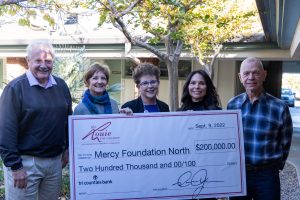